20% SUGAR TAX ON THE CARDS FOR SOUTH AFRICA

The Democratic Alliance (DA) says that government’s plan to hike taxes on sugar-sweetened drinks by 20% will lead to an increase in food prices, that will hit the poor.

The South African National Department of Health has set a target of reducing the number of people who are obese or overweight by 10% by 2020.

A report by Boston based Tufts University, published in the journal Circulation, found that sugary drinks may lead to an estimated 184,000 adult deaths each year globally.

Alarmingly, South Africa was ranked second in the world for deaths related to sugary drinks – below only Mexico.

By 2017, at current rates of consumption, sugar-filled beverages will contribute to over 9 million adults being obese in South Africa.

The sugar tax is one part of the strategy to break this trend. In theory, the tax would make the cost of cool drinks higher, making them less affordable and thus less appealing to consumers.

However, according to the DA, not only will the tax not have the desired effect – it will have a knock-on effect to other foods, which will ultimately hurt the poor most of all, as they cannot afford alternative forms of sugar.

“Minister Motsoaledi (should) rather focus on both diet and exercise interventions rather than interfering with the already overbearing tax regime,” the party said.

Why  a sugar tax isn’t the way

The party cited academic studies which show that South Africans have diets that lack fruit and vegetables, and are high in fat and sugar.

The studies also highlighted that most South Africans living in the rural areas and townships have limited access to facilities to exercise.

“Campaigns to transform diets and greater access to exercise facilities should be the priority in eradicating obesity,” the DA said.

“It is difficult to compel consumers to eat healthier foods by making unhealthy foods expensive. There are always cheaper, fizzier and sweeter alternatives on offer.”

According to the party, Mexico introduced a 10% sugar tax, and only saw a 6.4% drop in sales, a 10% drop in sugary drink consumption and a 7% rise in bottled water sales.

“With such feeble results, proposed tax hikes will firstly take longer than the intended five years (2015 – 2020) to reduce obesity by 10%, secondly, the poor will have to bear the brunt of higher food prices over the entirety of this extended period,” the DA said.

CAPE TOWN – The South African Revenue Services says it will be engaging with the industry stakeholders through regional roadshows on the implementation of the Sugary Beverages Levy (SBL) which will come to effect from April 1, 2018.

The dates and regions for the roadshows are as follows (venues not yet confirmed):

The SBL is a new health promotion levy in support of the Department of Health’s deliverables to decrease diabetes, obesity and other related diseases in South Africa

Union federation Cosatu and Business Unity South Africa (Busa) recently made presentations to Parliament’s standing committee on finance to hit the pause button on the tax to allow more research into its economic effect.

The treasury said this week it did not anticipate there would be “major or new changes” from what was already in draft legislation. The parliamentary process is ongoing, it said, and the levy will only come into effect once this is complete. 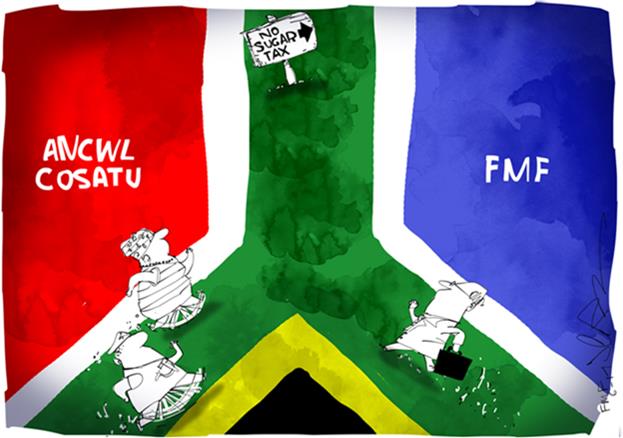 Taxing sugar and other “sinful products” is a blunt instrument that, besides treating adults like children, diverts attention from government’s desire to control ordinary people’s lives and to raise revenue by any means possible. The true unhealthy appetite belongs, not to those consumers of sugar threatened with another undeserved tax, but the taxer.

According to statistician Garth Zietsman, “People may choose not to reduce consumption of soft drinks in response to the tax but instead compensate for the additional expense by cutting back on healthy food and drinks or by switching to other sources of cheap sugar. Economics has documented many such cases of human behaviour.” Indeed, if people value their sugary treat more than they do reluctantly eating a less-tasty healthy meal once a week, one can bet money that they will cut out the healthy meal rather than the satisfying cool drink or chocolate.

A tax on sugar will erode further our personal freedoms. Yesterday it was tobacco, today it may be sugar and salt, tomorrow it could be government imposed restrictions on how loud you play your iPod or car radio; how close you sit to your television set; in time it could be how long you spend in the sun and, even, who you may or may not sleep with (shades of apartheid). The choices will no longer be yours to make – all in the name of your health.